Rider of The Day - Hettie West

We certainly had a fun filled and action packed day of showjumping on Sunday! It was really very difficult to choose our 'Rider of The Day' from so many fantastic horse and rider combinations.

In the end, we selected Hettie West and her stunning mare Jemima! Hettie and Jemima have not been out competing for many months due to Hettie's exam commitments.

The last time that we saw the pair, Hettie had a couple of difficult rounds and it seems that the break away from the competitive scene for a while has done the world of good. Sunday saw Hettie ride with total accuracy and the duo were clearly very much in synch with one another.

Having watched Hettie's initial round, we remembered what a lovely quiet, soft rider Hettie is which is a real pleasure to watch. We also happen to know a little bit of background about Jemima who has had no less than 8 previous homes at the age of 9! So with a rocky start in life it is so lovely to see how Hettie has brought this lovely mare on and the trust that she has in her rider is clear to see and so unexpected given her past.

It is these points that we felt deserved the top spot in our rider of the day award!

Apparently Jemima can have a stroppy mare tantrum at times and is prone to chucking a few nasty vertical bucks, you would never imagine this, she comes across as a real sweetie!

Hettie would love to go on and affiliate with Jemima and judging by Sunday's performance I would say it's a very realistic ambition indeed!

Hettie's favourite thing about competing at GFP is the friendly atmosphere and people - thank you for your lovely comments, we are so pleased that you enjoy showjumping here and we look forward to seeing you very soon!

Rider of The Day - Hettie West

Rider Of The Day - Tracey Sansby

Rider Of The Day - Georgia Radley 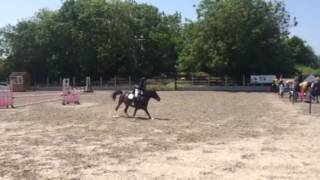 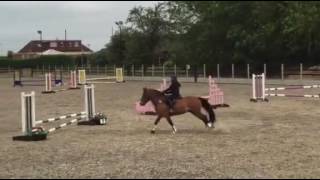